Local full-service creative agency, Right Angle, was recently honored with a number of awards at this year’s American Advertising Federation of Acadiana ADDY® Awards including the 2012 People’s Choice Award and a Special Judges Award.

Right Angle was honored with the 2012 People’s Choice Award for vehicle graphics created for the Lafayette Transit System compressed natural gas buses. The award-winning design features a pattern of dispersing leaves and the words, “Fueled by Nature.” The People’s Choice Award is given to the design that receives the most votes among all entries by industry attendees at the ceremony.

Right Angle was also given a Special Judges Award for its logo created for Hydro-Blade Waterjets, an industrial waterjet cutting service.

Naomi Primeaux, a recently promoted full-time designer for Right Angle, was presented with two awards of her own for student work in packaging and brochures.

The 2012 ADDY® Awards competition, hosted by the American Advertising Federation of Acadiana, honors the work of individual industry professionals and creative firms. This year’s event was held at Keith’s Ballroom in Broussard, Louisiana and featured a 1920s theme under the event name “The Roaring ADDYs.”

Right Angle, founded in 1987, is a full-service creative agency specializing in branding, marketing, advertising, and public relations for all areas of media including print, television, radio, Web design, and social media. 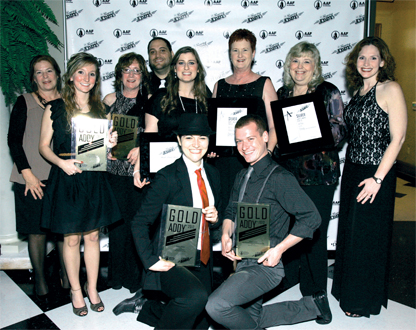