Right Angle, a local marketing agency, has their third award-winning design appearing on natural gas-powered buses as a part of the Lafayette Consolidated Government’s newest fleet.

The buses, covered with green grass and an egret taking flight, are the most recent in a series created by the agency. The other two designs travelling around the city sport either red leaves and UL Lafayette symbols or have large green leaves flowing along the sides.  All three versions are aimed at conveying the clean, environmentally friendly aspect of the fuel that powers them and feature the phrase “fueled by nature” as a part of their designs.

Through the American Advertising Federation of Acadiana, Right Angle received both a Gold ADDY and the 2012 People’s Choice ADDY. Additionally, they’ve received a gold award from Summit International and a Summit Creative Award for the series.

Right Angle, celebrating its twenty-fifth year in business, is a full-service creative agency specializing in branding, marketing, advertising, and public relations for all areas of media including print, television, radio, web design, and social media. They can be found on the web at rightangleadv.com or contacted at 337.235.2416. 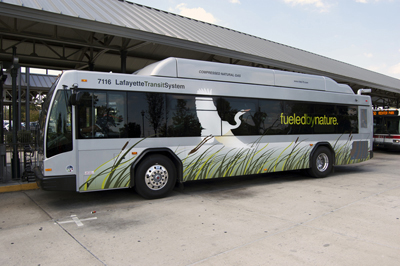